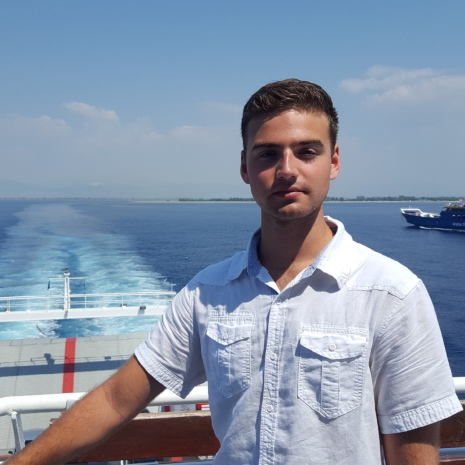 Ever since I returned to America from Greece, I have wanted to remain in touch with my heritage and my culture and the best way to reconnect was through the Modern Greek Studies Program at Rutgers.

Through the past three years of taking Modern Greek classes, I was able to learn the language and become proficient. With that said, students were able to get a taste of the plethora of facts that surrounds the language as well, such as culture, film, history, and current events that relate to the socio-political conditions of Greece and how the nation interacts with its neighbors, the Balkans, Europe, and beyond. Furthermore, the faculty epitomized the essence of what teaching is supposed to be, especially Professor Katherine Kourti-Gavalas, who was able to transform the classroom into a community that valued close professional relationships among students, focused on student growth both intellectually and personally, and dedicated time and effort to ensure that her students would succeed in all aspects of their academic career (both inside and outside the classroom). This spirit of the teacher (“daskalos”) and dedication that resides in Professor Kourti-Gavalas is a testament to her character and passion for both student growth and academic excellence.

Considering your current position and successes, was there anything in the classes or experiences you had, in pursuing Modern Greek and/or Modern Greek Studies, that contributed to your perspectives and accomplishments?

Although I am not a working professional, I have had professional experience through internships, which without the Modern Greek Studies Program (especially without the assistance of Professor Kourti-Gavalas), would not have been imaginable. I have interned at both the Consulate General of Greece in New York City and at the Permanent Mission of Greece to the United Nations and I could not have thoroughly experienced these positions without the comprehensive understanding of the Greek language that Professor Kourti-Gavalas was able to provide through her language courses. Furthermore, the fact that our classroom(s) is a tight knit community, Professor Kourti-Gavalas was able to more clearly articulate my qualities as both an academic and as a person when I was applying for these competitive and demanding positions. Last but certainly not least, Professor Kourti-Gavalas’s enthusiasm for teaching the Greek language inspired me to pursue learning other languages, such as French and Russian, which were crucial in aiding me in my internships at both the Consulate and at the UN and are invaluable skills to acquire for someone who wants to pursue a career in foreign affairs.

Were you able to participate in any of the Modern Greek Studies Program’s approved locations overseas — i.e., the summer program in Thessaloniki, or the semester/AY programs at CYA in Athens and ACT in Thessaloniki? How did such experiences impact you?

I had the pleasure of studying abroad in the program at Thessaloniki (ACT), in which, as a Greek Modern Studies Minor, I was able to receive considerable financial support. From the moment we landed in the city, we were immersed in the language, the rich and historic culture, and our cohort was privileged to have been given the opportunity to give back through community service. For me personally, the community service part was one of the most unique aspects of studying abroad because it not only forced me to utilize my language skills, but it enabled me to grasp the socio-political and economic reality of the city’s residents and what it is like for the average Greek citizen to live during one of the most challenging periods in its modern history.

Although I would definitely recommend this minor to anyone of Greek heritage, I believe it is necessary for someone of non-Greek heritage to participate in the Greek Modern Studies Program (even if it is one language class) to be able to appreciate the language and culture that was both the cornerstone and foundation for western civilization and its wide ranging accomplishments.