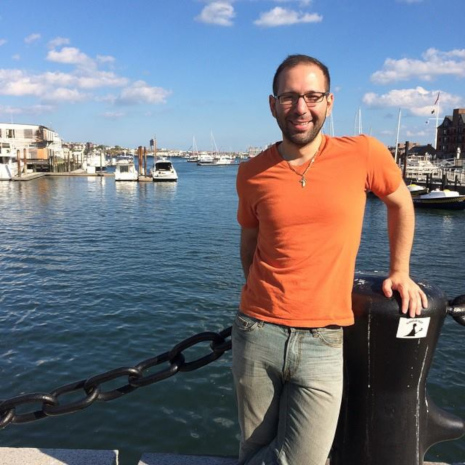 Current Position:  Presently a PhD candidate (ABD) at the University of Pittsburgh and this year I am on the Mellon Fellowship. I have done fieldwork in Istanbul for 11 weeks in 2016, and in Athens for 5 weeks in 2017 (with Istanbul Greeks who relocated there for various reasons). I currently am in Istanbul for another 8 weeks conducting sociolinguistic interviews with members of the Istanbul Greek community as part of a larger ethnography. I’ve presented some of my preliminary findings at conferences in Chicago, Cyprus, London, and most recently in Albania. My goal when I (hopefully) defend my dissertation in 2020 is to secure a position as a tenure-streamed linguistics professor teaching courses related to language and identity and language contact, while also bringing awareness to my Istanbul Greek community and the dialect.

Initially, I took the language courses as a heritage speaker with zero formal education in Standard Modern Greek. I ultimately pursued the minor as I double majored in linguistics and Spanish linguistics and found the minor to complement my studies well, while also adding to my communicative competency. Furthermore, as a linguistics major, I soon realized there was a serious dearth in literature on my family’s dialect, Istanbul Greek. The minor allowed me to take the initial steps that have led to my current and future career.

As an instructor, Katerina Kourti-Gavalas made for a positive classroom environment. I always looked forward to attending classes with her, regardless if they were at 8 AM or in the afternoon. During my time as an undergraduate student, there were fewer approved classes for the minor than there are now, but I thoroughly enjoyed and benefitted from them. The independent study in particular was very helpful in preparing me for graduate school research. I liked that the minor required me to take a class in the history department, which I otherwise wouldn’t have done.

Considering your current position and successes, was there anything in the classes or experiences you had, in pursuing Modern Greek and/or Modern Greek Studies, that contributed to your perspectives and accomplishments?

I owe much of my current successes to having completed the minor in Modern Greek studies, which I will provide greater detail in the following question.

If you pursued a M.A. or Ph.D. after graduating from Rutgers, did the courses you took in Modern Greek, or Modern Greek Studies, help prepare you for graduate work, or your professional life in general?

Very much so. My current Ph.D. program is in sociolinguistics and my dissertation topic concerns the endangered Istanbul Greek dialect and how it relates to the identity of the dwindling community. Starting from the language courses, I was able to develop and refine my reading and writing skills, which have been crucial in reading some primary and secondary sources relevant to my field. Additionally, as an important component of my research concerns language attitudes and ideologies, my experience speaking my dialect in a classroom with heritage and non-speakers of Greek led to adding nuance to some of my ultimate research questions. The opportunity to take a history class on the later years of the Byzantine Empire with renowned professor Stephen Reinert, was immensely helpful, as Istanbul is of course the successor cite to Byzantium, and understanding the complex trajectory of the city and region in general has been invaluable in understanding the current community. Furthermore, a major part of Istanbul Greek identity is their affinity for maintaining stronger ties with their Byzantine past, which differs from Mainland Greeks who typically have Classical Greece as a referent point. Taking the class gave me the ability to draw important connections that I otherwise might have missed. The independent study I completed was a preliminary sketch grammar of the Istanbul Greek dialect, which is of course factoring into my dissertation. I recorded my late grandmother speaking the variety, which led me to ultimately refining my research questions and interview tactics for my current research. Having that semester to experiment without the stress of graduate school certainly allowed for a smoother transition into my current career path.

Were you able to participate in any of the Modern Greek Studies Program’s approved locations overseas — i.e., the summer program in Thessaloniki, or the semester/AY programs at CYA in Athens and ACT in Thessaloniki? How did such experiences impact you?

I did not participate in any of these, and I’m not sure if the summer program was even available while I was an undergraduate. However, I am a big proponent of such programs, and I did study abroad in Spain the summer before my senior year. That experience changed my life, and I ended up doing a one-year MA program with NYU in Madrid. I’ve since traveled to other 20 countries, and that in turn has been life changing.

I would say to any student interested in but hesitant to pursue the minor, that I was too. I waited until my sophomore year to take the language class because I was insecure of my abilities and my previous experiences with other Greeks was less than positive. I was nervous as I’m only of partial Greek descent, and from Turkey, and with a distinct dialect, that I would be treated as an outsider. But I met some amazing people in the MGSP (Greek and otherwise), some of whom I am still close friends with, and I am so grateful that I stuck through with the minor, as the skills I developed helped me down the road in countless ways. My independent study experience prepared me for both my MA and especially my PhD. The language classes helped me become eligible for a three-week summer research fellowship through Hellenic College Holy Cross, where I went with a group to the Oral Histories Archives of the Centre for Asia Minor Studies in Athens to read dossiers of Greek refugees from Cappadocia. That experience in turn helped me develop important contacts in Greece and Turkey that without my current research would be impossible otherwise, as well as helped me get into my PhD program. At the risk of sounding dramatic, my entire life would be very different had I not pursued the MGS minor at Rutgers. Take a few classes, and if you follow through with the minor, you never know how large a role it may play in your life.