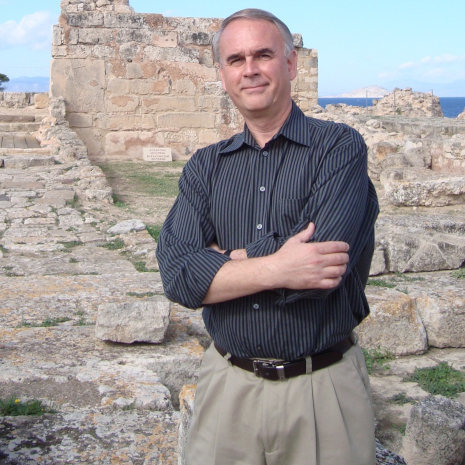 Director, Modern Greek Studies Program
(848) 932-8234
This email address is being protected from spambots. You need JavaScript enabled to view it.

Stephen Reinert is the director of the Modern Greek Studies Program. He is responsible for curricular and administrative oversight of the program, and coordination with students and faculty engaged in annual fundraising enterprises.

Throughout his thirty-five years at Rutgers, Reinert has been involved with the Modern Greek Studies Program as an enthusiastic supporter, teacher of courses in Byzantine history, and director (2009-2015, 2018-present). He shares the faculty vision of preserving the program's current outstanding curricular offerings, and further expanding it with the eventual appointment of a named chair (Elytis) in Modern Greek Studies.

Reinert's academic specialization is late Byzantine, medieval Balkan, and early Ottoman history. He earned his Ph.D. in history from UCLA (1981), under the direction of the eminent Byzantinists Milton V. Anastos and Speros Vryonis, Jr. He has held fellowships from Dumbarton Oaks, the American School of Classical Studies, the Fulbright Program, and the National Endowment for the Humanities.

Reinert's representative articles on late Byzantine and early Ottoman history are published as Late Byzantine and Early Ottoman Studies (Ashgate, 2014). He was also the principal editor of TO ELLENIKON: Studies in Honor of Speros Vryonis, Jr., vol. 1, Hellenic Antiquity and Byzantium, and vol. 2, Byzantinoslavica, Islamica, the Balkans and Modern Greece (Caratzas, 1993). He is the coordinating translator and editor of the English edition of Matei Cazacu’s Dracula (Brill, 2017). He is currently at work on two books: Yıldırım I Bayezid: An Early Ottoman Sultan, and Studies on Manuel II Palaiologos.